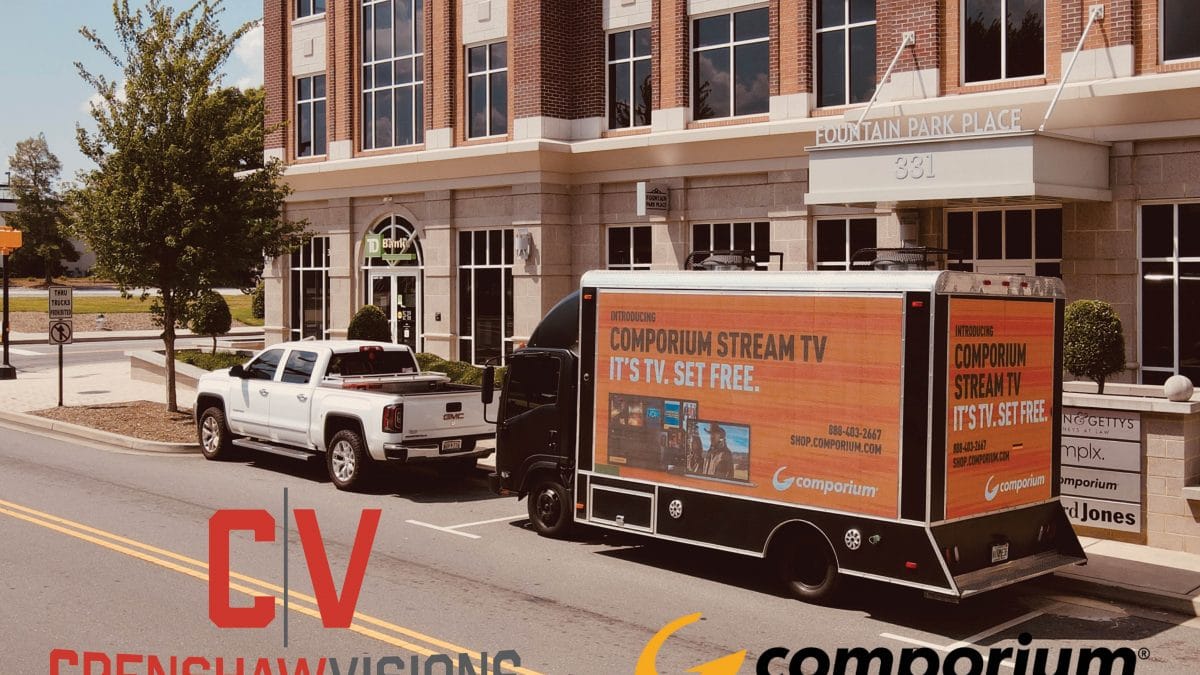 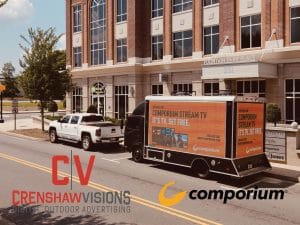 LANCASTER, S.C. – July 3, 2020 – Carolina businesses, like Comporium, who looking to innovate their approach to advertising via billboard now have a new option open to them. Crenshaw Visions has expanded their offering of outdoor digital billboard products to include one that is mobile. The Lancaster-based company recently unveiled their new Mobile Digital Billboard with coverage of the Charlotte Metro region and upstate of South Carolina.

While still a novelty in the Charlotte metro region, mobile billboards frequent the streets of other urban areas. The mobile billboard used by Crenshaw Visions offers digital advertising on the driver side, passenger side, and rear of the truck. Each side contains and LED screen capable of running multiple ads, each with limited animation. Comporium, the Rock Hill-based communications provider, immediately saw the advantage of partnering with the company to reach more potential customers.

Crenshaw Visions is working with Comporium and its other clients to ensure that their digital ads are exciting and still meet local and state requirements for mobile advertising. Finding the perfect blend of eye-catching, but not distracting, means that clients can incorporate striking graphics and some animation into their messaging. For safety reasons, video is not really an option in most cases.

“We wanted to bring a new, dynamic form of advertising to our customers that we’d seen be very successful in other parts of the country,” stated Garrett Crenshaw, founder of Crenshaw Visions. “Even though this is a new approach for us, it’s really just an extension of what we’re already doing for our customers with our other products. We’re helping them realize their vision and share their message in an exciting way.”

Comporium and Founders Federal Credit Union are just two of the larger companies in the area that have signed on with Crenshaw Visions to take advantage of their new Mobile Digital Billboard. “We were looking for a way to reach our customers that was outside of the traditional billboard and print media box, but still work in the digital realm,” remarked Comporium’s Senior Vice President of Marketing and Media Services, Pamela Trimnal. “Crenshaw Visions offered the right blend of innovation and partnership to meet our needs and make sure we could get our message across to customers throughout the tri-county area.”

The mobile billboard is as fun as it is professional. Crenshaw Visions states that it is also available on weekends for private events ranging from professional and corporate gatherings to personal celebrations. If you’re interested in seeing if Crenshaw Visions’ mobile billboard is the solution for your needs, contact them at sales@crenshawvisions.com.

Crenshaw Visions looks to enhance its clients’ business through outdoor digital advertising. Their products include stationary digital billboards, largest double-sided one being located on I-77, and a three-sided Mobile Digital Billboard that covers the Upstate & Charlotte Metro Area. For more information, visit them on Facebook, Twitter, or Instagram.