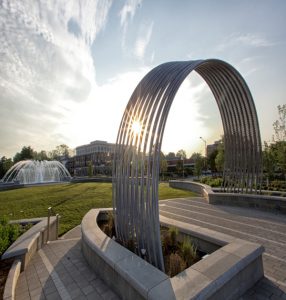 Gerry King, a retiree who has picked up her camera again to make photography one of her major hobbies, captured first place with her early morning shot from the E. Black St. end of the park toward the E. Main St. side, which featured the performing arts “shell” in the foreground and the fountain and new professional office building at the other end.  King is awarded the grand prize of a new iPad and $100; plus, her winning photo will be featured on the cover of the next York County directory that will be distributed at the end of August.

Second place went to Mark Stewart, who is employed with Inspiration LLC in Charlotte in the company’s master control group that airs programming for the Inspiration Network. He received $250 for his runner-up entry that showed a crowd of people around the fountain during a recent Food Truck Friday event.

The third place prize of $100 went to nearby resident, John McAllister, a curved staircase builder at Southern Staircase in Charlotte. He beat the odds by taking his photo with his older model cell phone, capturing a golden sunrise shot of the fountain with First Presbyterian Church in the background.

The other top photos will be found in the information pages section at the front of the directory along with an article featuring more about the top three photographers.