What are the specs for a SuperPod?

Power Consumption is based on operating use

What is the maximum WiFi speed of a SuperPod?

Maximum device WiFi speed is dependent on several factors such as:

What is the range of the SuperPod?

It’s difficult to provide you with exact numbers because of all the variables and configurations inside a home.

While every home is unique, you can place SuperPods in every other room in your home. It has a range of 30-40 feet through walls and 60-80 feet apart for large open spaces. Our system measures the performance between each pod and creates the best pod-to-pod connections for you after optimization completes.

Premium WiFi powered by Plume supports IPv6 when the Networking Mode is set to Auto (Bridge). Since your router is distributing IP addresses when Plume is in Auto (Bridge) mode, it will allow IPv4 and IPv6 propagation to end client devices.

Premium WiFi powered by Plume does not support Power over Ethernet (PoE). You will not be able to run PoE devices wired to Premium WiFi, they will require a separate power supply. We have designed our pods with this in mind in order to maintain their compact design, after all we like to be stylish.

All pods must be plugged into an AC outlet and cannot be powered by PoE.

Premium WiFi powered by Plume does not support Power over Ethernet (PoE). You will not be able to run PoE devices wired to Premium WiFi, they will require a separate power supply. We have designed our pods with this in mind in order to maintain their compact design, after all we like to be stylish.

All pods must be plugged into an AC outlet and cannot be powered by PoE.

Why are VPNs being blocked?

When a VPN is in use, the client device’s traffic is encapsulated and will no longer be protected by Premium WiFi Guard or Content Access features. For this reason, Premium WiFi powered by Plume AI’s Online Protection feature blocks most known commercial VPN service providers by default. Non-commercial VPNs, such as ones from work, school and personal are generally not blocked by default.

WPS was a common method of adding a device with a limited user interface (printers, IoT devices) to a wireless network.

Premium WiFi powered by Plume does not support WPS as it was discovered to be a less secure connection method for WiFi networks.

What does the LED light on my pod mean?

When initially plugging in any pod into an outlet, the light should always turn solid for a moment, and then the LED will slowly pulse while it is trying to connect to the cloud. Once connected to our cloud, the LED will then turn off.

If there is no light at all when first plugging in the pod, check your outlet with another appliance or device to ensure it has power. If the outlet is okay, there may be something wrong with the pod and you should Contact Comporium Support for assistance. Even if this behavior only happens intermittently, you should still contact Comporium support.

This could mean either of the following:

If you can’t see all the pods being claimed in your Plume app and if you see the slow LED pulsing on the pod at the same time, the pod is most likely claimed by another household. Contact Comporium Support for assistance.

Continuous rapid blinking (red) – there may be an issue with the onboard software or possible fan failure. Contact Comporium support for assistance.

How can I check to make sure I have an internet connection?

Nobody likes to be without a connection to the internet. Let’s find out what’s causing the problem.

How can I fix poor pod connection issues?

If a pod displays “Poor health” and you are noticing an impact, there are a few steps you can take to improve its health:

Move pods closer to each other

Hardwire pods to your router or switch

Keep Pods in the open and away from metallic objects

Absolutely. Premium WiFi supports Ethernet backhaul. This means you can setup multiple gateway pods by connecting them directly via Ethernet to deliver the fastest possible performance to your devices.

The backhaul is the connection between the pods going to your modem and is the core of your network.

An Ethernet switch can also be used to further expand how many pods are connected by Ethernet.

How does hardwiring pods improve the network?

Having Ethernet cabling in your home provides a large advantage in terms of the WiFi speeds you can achieve.

When Ethernet is not available throughout the home, which is the case of most people, our pods will use WiFi to backhaul the network traffic between the pods. However, if you have Ethernet in your home, you can connect the pods to the Ethernet jacks in the home and that backhaul traffic will travel over the Ethernet cable. In addition to avoiding potential WiFi signal strength issues between pods, this leaves more airtime available for the rest of the WiFi network and devices for increased WiFi speeds.

Also, because you are using the Ethernet to backhaul traffic instead of WiFi, you may be able to space the pods a little further apart since their connection to each other is no longer over WiFi. Just make sure you are not creating coverage gaps for your devices.

Can pods be wired to each other (daisy-chained)? 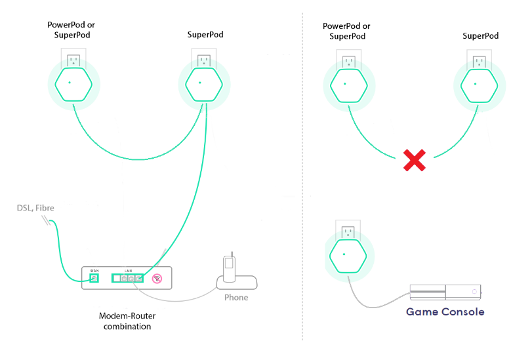 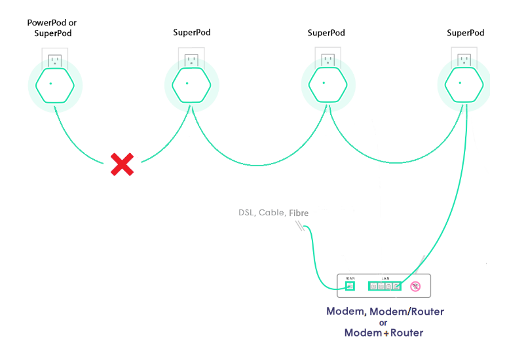 What else can I use the Ethernet port for?

If you are not using the Ethernet port for backhaul connections, you can use the port for connections to your wired clients, like an XBOX or desktop PC. Even if your device is capable of both WiFi and Ethernet, plugging a normally static device into the free Ethernet port of a convenient nearby pod will help free up more airtime for the WiFi connections of other wireless-only devices. 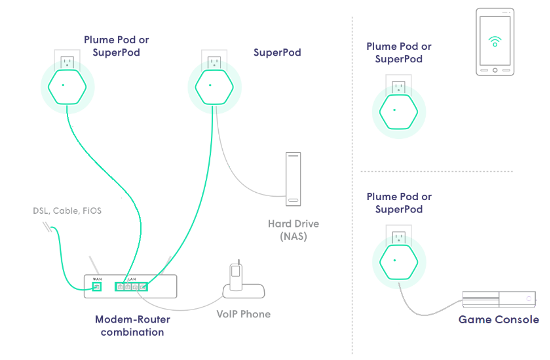 An Ethernet switch can be connecting to the pod’s Ethernet port to further expand how many devices are hardwired to that pod.

What kind of Ethernet cable do you recommend?

You can use any quality Ethernet cable to hardwire your pods, although we recommend CAT 6 or CAT 7 to ensure Gigabit speeds over longer runs.

How do I setup Premium WiFi powered by Plume while keeping my devices connected to the router?

You can easily setup Premium WiFi while keeping your devices connected as long as you have one Ethernet port on your router available to connect the SuperPod via network cable. 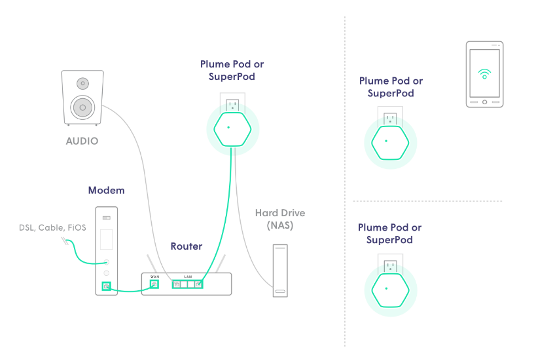 If you do not have any Ethernet ports available on your router, you can use a switch to add additional ports. Replace one of your devices connected to your router with the switch. Then, connect the previously removed device and pod(s) to the switch via Ethernet cables. 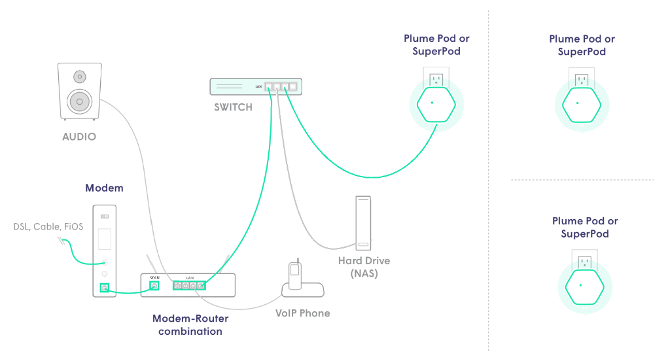 Would it be better to just connect devices directly into Premium WiFi powered by Plume’s Ethernet port on a pod versus over WiFi?

You will enjoy slightly faster speeds on your device when you hardwire them to a pod by Ethernet cable.

Connecting a device to a pod by Ethernet will not negatively impact your Premium WiFi performance. Premium WiFi supports Ethernet backhaul, meaning you can now create networks with multiple gateways and pod-to-pod Ethernet connections!

Please note that you may need to power cycle the pod you have connected to your device for Premium WiFi to properly recognize and add it to your network.

Was this article helpful to you?